The human gastrointestinal tract or gut is naturally colonised by trillions of bacteria. These bacteria play an important role in human health, aiding digestion, metabolism and supporting the immune function. Collectively, these microorganisms are known as intestinal microbiota and they are essential to the normal function of the gut.

Gut dysbiosis occurs when the balance of good bacteria and bacteria in the gut is disrupted. This can be caused by many factors such as poor diet, alcohol consumption, poor dental hygiene, lack of sleep, stress, antibiotic use and even disease. Once the gut microbiota is altered, pathogenic bacteria such as E. coli may over colonise the gut and release toxic by-product known as lipopolysaccharide (LPS) or endotoxins.

Increasing scientific evidence suggests that LPS is a potent activator of inflammatory responses in the body. Inflammation has been linked to many intestinal conditions including Inflammatory Bowel Disease (IDB) as well as organ dysfunctions such as the liver.

A New Direction in Treatment

Protectyn® is an immune supplement scientifically formulated to be rich in anti-LPS antibodies to target pathogenic bacteria and the harmful LPS toxins they produce in the gut, reducing their ability to disrupt the healthy function of the gut, liver and immune system.

Protectyn® contains high levels of anti-LPS antibodies that target pathogenic bacteria and the LPS toxins they produce in the gut. Protectyn® binds to and neutralises these bacteria and their toxins, allowing them to be eliminated from the GI tract before they can colonise, multiply, leak into the bloodstream and disrupt the digestive system.

Clinical studies have shown protection up to 90% from E.coli (ETEC) in those taking Protectyn®.

Protectyn® is antimicrobial but not an antibiotic. It will not cause dysbiosis of the gut microbiome like antibiotics do or cause bacterial antibiotic resistance, an increasing concern for medical authorities. 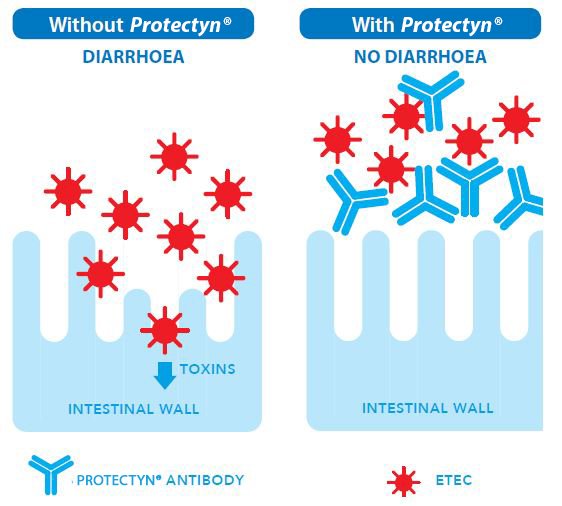 The presence of LPS toxins in the body can induce inflammation and have a detrimental effect on liver health. Under normal circumstances LPS remains contained within the confines of the GI tract and causes no pathology. LPS toxins can gain access to the circulatory system via a multitude of routes and can then leak into the surrounding tissues and initiate inflammatory processes. In situations where there is no obvious physical breach of GI barrier integrity, LPS can translocate across the barrier by being absorbed with the digestion of lipids associated with a high fat diet.

By targeting and removing harmful LPS toxins in the gut, Protectyn® helps to:

Protectyn® is also rich in nutrients and immune components which can enhance immune defence by protecting against a wide range of pathogenic bacteria and the toxins they produce.