Protectyn® is an oral biopharmaceutical product that is scientifically formulated to contain high levels of active antibodies. These antibodies target pathogenic bacteria and harmful lipopolysaccharide (LPS) toxins they produce in the gut, reducing their ability to disrupt the healthy function of the gut, liver and immune system.

Protectyn® is not an antibiotic, and therefore does not promote antibiotic resistance. 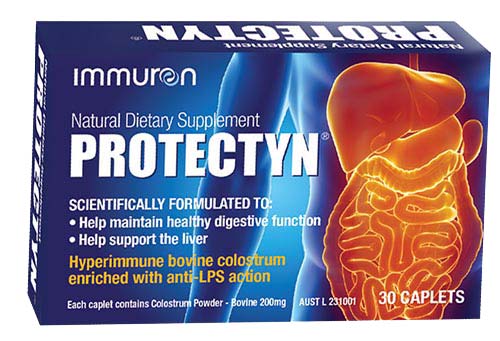 Do not take this medicine if you are allergic to any of these ingredients.

Lactose intolerance: The amount of lactose in Protectyn® has been reduced <10% which equates to <20mg/caplet which is considered well below the level any clinical symptoms are expected to be caused in lactose intolerant patients.

Protectyn® has been tested and shown to be gluten free.

Protectyn® is a caplet which should be taken orally before every meal.

Directions for use: Take one or two caplets before every meal, three times per day or as directed by your healthcare practitioner.

Check with your health professional if you:

For children under 6 years of age
Consult your health professional before using.

If symptoms persist, talk to your health professional.
Seek medical advice if diarrhoea persists for more than: 48 hours in adults and children over 6 years. 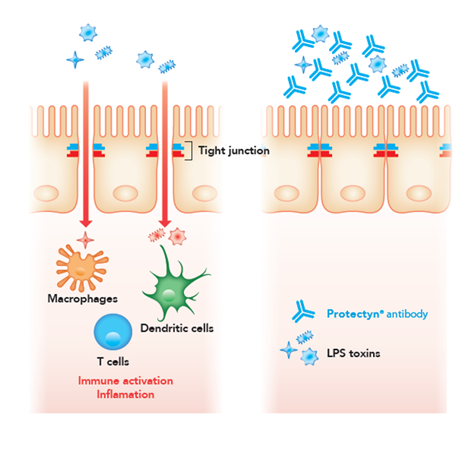 The active ingredient – Bovine Colostrum Powder (BCP) in Protectyn® is sourced from New Zealand and dairy cows that have been specifically “hyper-immunised” with patented Immuron vaccines by experienced and qualified veterinarians. These vaccines illicit a strong immune response which allows the cow to produce very high levels of specific antibodies, against pathogenic bacteria and harmful lipopolysaccharide (LPS) toxins. These anti-LPS antibodies bind to these bacteria and the toxins they produce, effectively neutralising and allowing them to be eliminated from the gastrointestinal tract before they can colonise, multiply and leak into the bloodstream, disrupting the digestive system.

Immuron has partnered with Synlait, an innovative and trusted dairy company based in New Zealand, for the supply of its bovine colostrum powder. Synlait specializes in the processing of infant formula and special milk powders and operates under an internationally accredited ISO/IEC 17065 dairy assurance system. Synlait only partners with certified dairy farmers which exceed New Zealand’s Animal Health and Welfare standards. In addition to this, Immuron’s commercial operations are managed by experienced and qualified veterinarians. A small portion of colostrum is harvested from selected dairy farms for processing, leaving plenty for the calves and standard dairy farm requirements.  The health and welfare of a herd impacts directly on milk quality. The best dairy farmers know this and work hard to ensure a happy, healthy herd. It’s the proactive steps they take today that help improve milk production tomorrow. Click here for more information on Synlait’s Lead with Pride programme.

Clinical trials of IMM-124E (the active pharmaceutical ingredient used in Protectyn®)
Protectyn® underwent independent double-blinded placebo-controlled E.coli (ETEC) challenge trials in Europe and the USA. The trials showed protection of up to 90% against infection with E.coli (ETEC) and the development of diarrhoea. Participants who took dose regimens of 1 caplet (200 mg) and 2 caplets (400 mg) of Protectyn® three times a day had significantly less discomfort and diarrhoea compared to those who did not receive Protectyn®.

In vitro & pre-clinical studies of IMM-124E (the active pharmaceutical ingredient used in Protectyn®)
Pre-clinical studies were conducted to investigate the anti-inflammatory potential of Protectyn® in two mouse models of colitis. The results demonstrated that oral treatment with Protectyn® significantly reduces intestinal inflammation and confirmed that the administration of Protectyn® may represent a novel therapeutic strategy to induce or maintain remission in chronic colitis.

In another pre-clinical study stool samples were collected from mice treated with either Protectyn® or placebo for microbiome analysis. This mouse model demonstrated that Protectyn® increased the abundance of potential gut-beneficial bacteria, such as the genus Akkermansia, and reduced Clostridium (Clade III) without disrupting the underlying ecology of the gastrointestinal tract.